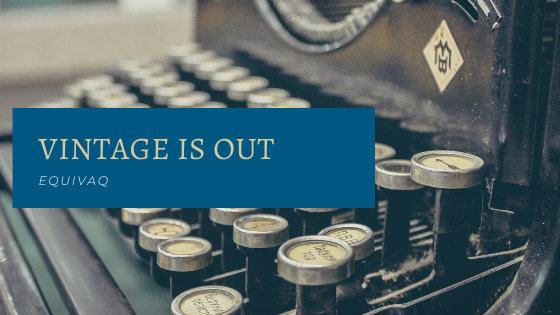 When it comes to checkered Vans, chokers, vinyl records, and 90's grunge, that's totally in. When it comes to vintage data processes, that's way out. Things have changed a lot since 2000. For example, 2/3 of the Q's office team was still living with their parents... because they were kids. The same goes for technology. In 2000, the first iPhone wouldn't be released for another 7 years, Word 2000 had been on the market since June of '99. Excel was only 15 years old!

It's incredible how far technology has come, and hard to imagine where it will go. In addition to that, there's no denying that you have to keep up or you will very quickly fall behind. Your 2007 iPhone wouldn't still be functional today, and why would you want it to be? There are much better quality and more functional options out there. The same goes for your firm. If the way you store data is more than a decade out of date, why are you resisting an update?! It probably already costs you money in lost productivity, but soon, if it's not already, it'll start costing you money in opportunity and competition as well. Avoiding these changes can and will make your firm lose money hand over fist.

I know a lot of firms still use Excel and Word for engineering change orders. It's a pretty common practice. I also know a lot of operations teams don't know what's out there. If Henry Ford had asked his customers what they wanted, they would've said "a faster horse!" Ford's customers didn't know what their options were, and you'd be hard pressed to find someone today who would choose a horse over a Ford as their means of transportation. It's also common for us to see a nightmare of a system holding a firm hostage as a result of VBA enabled .xlsm and .docm being used. All it takes is a talented engineer or system admin, and before you know it, your change form turns into a Decepticon!

Don't get me wrong, your engineer means well, they really do. And VBA enabled programs aren't the end of the world, (at least not usually) but they aren't secure and put your business in a really vulnerable position. They're easily hackable, and since a huge amount of your firm's data is stored there, it all becomes fair game for anyone who gains access. We see managers who are so enmeshed in their Excel programs that they don't even want to consider changing. It becomes a fight of "but if we change, we did all that work for nothing." Which I get it. But once you learned how to tread water, didn't you also learn how to swim forward? It's not a one-and-done type of learning experience. You have to keep going.

There are several benefits of using XML, but I think the #1 pro is that it is FREE! It does not require Office to be installed, nor does it require opening a separate application to edit and update values. It's also not lacking in terms of features. PDM supports printing from the "preview" tab, to both hardcopy and PDF. It can be updated from a central location, meaning there's no mass "everybody update your computer!" whenever an update comes out.

It supports HTML boxes so you can add radio buttons, checkboxes, edit boxes, and whatever else you need. I think the coolest feature is that you have customizable form layouts using CSS (custom style sheet for formatting the layout and curb appeal of the form), so the layout can be edited to match your company's specific form look and feel. It only contains metadata so file sizes are small, and it works perfectly using PDM templates and serial numbers. It also features variable mapping, and there's a great how-to out there that explains it step by step!

It is the way technology is going, and it really just makes sense to use this. It's much more secure than Excel or Word, but it's still customizable and incredibly functional. As always, we are more than happy to answer any questions you have! Our main priority is making things easier when it comes to SOLIDWORKS!

This entry was posted in PDM, Database Performance, Datacard, xml