The Road to ATLAS: Part 2

Posted on February 18, 2021 by Katelin Hamilton 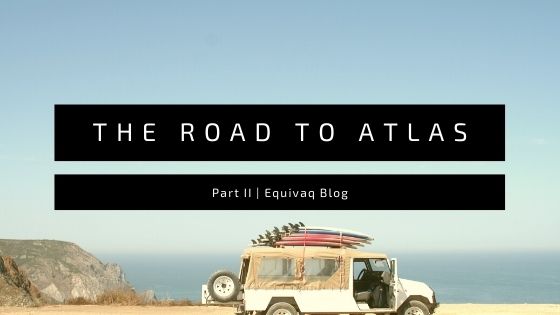 In all of Tim's ventures, there always been a great focus on making people's jobs, lives, and workplace environment easier. We're in the business of removing roadblocks so people can do what they're good at, better. The "dashboard" at BizJet was the start of something a lot bigger than Tim realized. Something that would turn into a staple of Equivaq's offerings, and the beginning of his daily use of data analytics, which absolutely aren't going anywhere.

In 2015, Tim took ATLAS to SOLIDWORKS World. He got feedback from as many SOLIDWORKS users, experts, and engineering fanatics as he could and the most common thing he heard was essentially that "it'd be cool if this had a mobile platform." So Tim went back home and designed a mobile platform to go along with it. 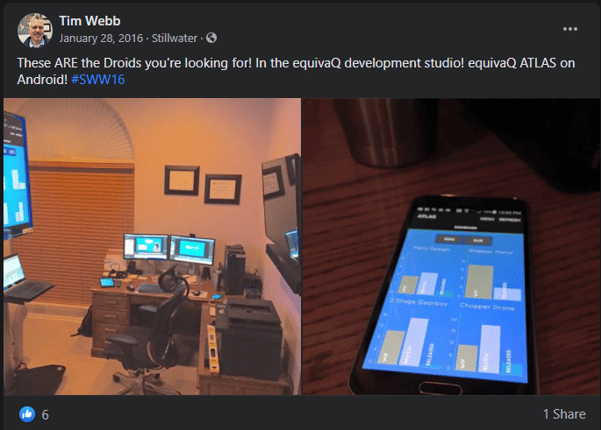 If there's anything you can count on, it's that you can't count on what people think they want. I am obsessed with marketing research. It was my favorite class I took in college, so much so that I did an independent study over it afterwards. The number one thing my professor stressed in that class (besides "grades don't matter," but that's a story for another day) was that you cannot ask people what they think they'll do. They don't know! If you ask someone if they plan on going to the gym more than two times per week, they'll probably say "Yeah, of course!" because it sounds good. People are finnicky, so to get a clear picture for research, you have to ask them what they've done. Following that example, you'd ask "How many times have you gone to the gym in the last two months?"

Anywho. Back to the topic at hand.

Tim took the ATLAS mobile app to SOLIDWORKS World 2016, and in a year's time people had changed their minds. They no longer wanted a mobile app, instead they wanted a desktop application. ATLAS was too complex of an add-on to be fully functional in a mobile app. The in-hand display of the app was neat, but not the pinnacle feature of the product.

As frustrating as this was, Tim had to take responsibility for it. He told me "I couldn't see that there was no market for it in a mobile app. I never did my market research." If you are an entrepreneur half as passionate as Tim, you know this is a common mistake made by entrepreneurs; getting so excited and hyper-focused that they get ahead of themselves and end up (at best) a little bit off course.

Obviously Tim has since corrected course, and made incredible leaps and bounds for not only Equivaq but also the SOLIDWORKS and engineering communities as a whole, but at the time it felt massive. He certainly was kicking himself, but if it weren't for those mistakes, he never would have learned valuable lessons and gotten the invaluable feedback from SOLIDWORKS users and experts that he did. He put himself out there, and ATLAS and Equivaq are better for it.

Tim's idea for a dashboard came long before ATLAS, but it was a defining moment in his career that shaped his future. He still talks about his time at BizJet fondly, and even said he wonders what would've happened if he had stayed a while longer in that position. He says it's the best work he's ever done, and attributes it all to the people he worked with. His best advice for anyone in a position similar to his is to "let the people draw the creativity out of you." Tim spent a lot of time "in discovery," talking with Steve Cashon and other supervisors and managers at BizJet. His priority was understanding the problems they had in order to provide a solution that would work long-term.

He ultimately left BizJet to start Equivaq, so Hunter, Jace, and I are definitely glad things worked out the way they did. Our dashboards are one of our proudest offerings. In part because of their history, but also because of their functionality. We designed our tools to fit a need we saw, and continue to see over and over. To talk more with Tim about BizJet, troubleshooting, dashboards, or anything else in his wheelhouse, schedule a meeting.

This entry was posted in Solidworks, dashboards, Educational, Hobby

Start at the Beginning How to Stay Motivated as an Engineer